The Genius of Crows

Home - Blog - The Genius of Crows

You can get quite blasé about the wildlife trekking through the garden at Dale Farm; badgers, pheasants, owls, house martins, chiffchaffs, swallows and swifts galore and hundreds of hares and rabbits.  We also have our fair share of pesky moles, nuisance summer flies, the odd rat and so on. Followers of our Facebook page will know all about the hatching ducks, the visit to the vet with the owl, deer glimpsed walking through the woodland one summer morning, the bumble bee nest and the horrid grubs that killed them off.  Our cabin guests are often woken by woodpeckers.  The first winter here was memorably cold; the animals were taking risks to get their food and I can remember one snowy night driving home when it was hard to avoid the suicidal owls and badgers. (There is actually a local band named Suicidal Badgers.)

Paul maintains that the cleverest of all creatures are the crows.  He reckons they have different calls for different emergencies.  So threats from above such as a predatory bird are alarmed with a different call to threats from below such as Paul walking out with an air rifle – yes they recognise anything gun shaped and can tell the difference between a sweeping brush and a gun.  I am told that our crows recognise the approaching vehicle of a particular local countryman who traps and hunts crows and warn each other of his arrival. They know they are safe when we have guests staying and flaunt their presence in the knowledge that Paul is only dangerous when alone.

Despite their intelligence, crows are not popular birds; a group of crows is after all known as a ‘murder.’  King Henry VIII put a public bounty on the crow along with its relation the rook.  I have to say I am not fond of crows as their population does tend to get out of control and they can be extremely noisy although I would draw the line at Baby Crow Pie which is eaten to this day in rural areas after a spring cull! Don’t feel too sorry for the crows; we have seen them steal babies from the nests of their relatives to feed to their own children.

Compare this to those demented mating ducks who waddle about laying eggs in the most unsuitable places then just toddle off and find somewhere equally unsuitable when all the eggs are decimated by a hungry animal (yes probably a crow).  Yet the march of the ducklings has been our most popular feature on Facebook – proves beauty beats brains every time in a public vote. 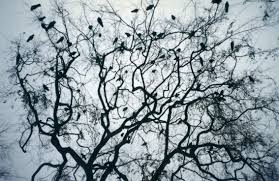